November 30, 2019 Off The Clock Nurse Jordan, Travel One comment

Visiting all of Today’s 7 Wonders of the World is a huge goal of mine along with learning about the history and culture of the country that holds them. So when I found a tour that also added on Jordan to the already 10 day Egypt itinerary, I had to jump on it. It was an extra 5 days in Jordan, but I feel like it wasn’t enough time. I would suggest finding a tour that allowed for full days in the Wadi Rum Desert and Petra… but here’s how my trip went:

Should I Take A Tour

I would recommend a tour for all the same reasons that I stated in my Egypt post. I always love taking guided tours when it’s hard to get around, and there is a lot of historical information to be learned. Our guide, Amjad, was wonderful. He explained everything completely, was very patient with us, and was very open about the culture and even his own lifestyle. My one biggest regret was not having enough time at Petra. I would have like one full day or the ability to go back the next day before heading on to our next stop.

If you are visiting Jordan, I highly recommend getting a Jordan Pass. You will still need to get a Visa once you arrive to the airport, but the cost of the Visa is covered with the pass along with entrance fees to many of the sites you will tour to during your time in Jordan. Before you get in line for immigration, there will be a separate area that says something like, “Purchase Visa Here” and while you won’t need to pay for anything, you still need to stop here, show your passport and Jordan Pass (I recommend printing it out or taking a screenshot on your phone). *There is really good free wifi in the airport, but not everywhere else, so make sure you can get access to your pass or you will have to pay for your entrance fees*

Our guide met us at the airport and we withdrew money from the ATM. We traveled in a small van, since only 6 of us continued on to Jordan from our Egypt trip. The van was equip with wifi as well, which was pretty cool since we were driving long distances and not much to look at other than desert land.

We stayed at the Hasan Zawadi Camp in the Wadi Rum Desert. They have two types of rooms, a small concrete house looking room with the interior that is designed to look like a tent. It was equip with a full bathroom and recommended that you should after 7pm or before 7am in order to get hot water. There were also these rounded tents available on the site. I don’t have much information on those since I was given one of the other rooms, but I was happy with where I was staying. There was pretty good wifi in the common area, but not the rooms.

Wadi Rum is also known as the Valley of the Moon, stands 5,740ft elevation, and is a granite and sandstone valley located in southern Jordan. This is a popular filming location for many movies including: The Martian, Transformers, Star Wars, and many more. What I found most impressive was the stargazing. While it was very cold when we arrived in mid November, temperature high around 61F, the temperature would drop to around 45F at night. The Campground rooms had nice warm blankets and one of the other girls in my tour group and I decided to lay outside and look up at the stars. There is a stargazing tour you can take, but honestly, it was just as good laying there for free, burritoed in a blanket.

In the morning we jumped in the back of a truck that had padded benches built in and went for a ride around the desert. It was cold, so be sure to bundle up if you are visiting in the winter months. I definitely was not prepared for how cold it was going to be. I recommend bringing sunglasses too since it was windy and the sand would get in my eyes sometimes. Pictures and videos cannot do the views justice. The only downside to doing a tour, I wish we had another day to explore the desert. We had arrived at night and had a 2 hour ride around the desert before leaving for Petra.

The Ancient City of Petra

Since I learned about the 7 Wonders of the World, I had always made up my own ideas of what it would look like to visit them. For Petra, I imagined having to drive out the the middle of nowhere and then hike in through a sand trail. I don’t know how to say this, but I walked there from my hotel LOL. The entrance to The Ancient City of Petra is attached to the current city of Petra. Again, you will need your passport and Jordan Pass to get your entry ticket.

From the entrance to the Treasury it is about a 30 minute walk. However, the ticket includes a short horseback ride to the Siq (or start of the valley walk). It was recommended that we don’t take the horseback ride. The horses actually looked well fed, unlike the ones we saw in Egypt. The reason you shouldn’t take them is due to the horse handler. The ride really isn’t very long and once you get to the Siq, they will demand a large tip and won’t let you down or make a scene until you give them the tip they want, which can sometimes add up to $100 USD. Other ways to get in, horse carriage. I discourage this as well. There is one horse per carriage and they are seen breathing heavily as they have to pull a lot more weight than they should while being whipped by the handler. If you must take a mode of transportation, I suggest renting a golf cart, which will run you around $100 USD. But really the best way to see Petra is by foot.

The Treasury is the main attraction at Petra and can be quite crowded when visiting in the middle of the day. We lucked out and it wasn’t too bad when we went. There is so much more to Petra than the Treasury! Petra is actually a lot bigger than I imagined. I would recommend spending a couple days there to see everything. Our half day just wasn’t enough.

The Monastery looks similar to the Treasury, but is a bit of a hike. From the Treasury, I took us around 1.5 hours and walking up 850 steps to get to the Monastery. The views were beautiful on the way up, and once we made it there was hardly anyone there. If you continue past the Monastery, there is a beautiful look out over a valley. They offer donkey rides up to the Monastery, but again, I discourage you from taking it. I saw a couple donkeys licking the rocks because they were so thirsty and hungry. I will say, you need to watch your step since the stairs are covered in donkey poop, but it was still worth it.

You must exit Petra by sunset so they can get ready for the night show, which is $25 USD extra to re-enter at night. I didn’t go because my whole body hurt after hiking up to the Monastery, but one of the girls in my group went. She said it was cold and crowded. They had a couple performers, like a flute player, but people were continuously talking during his performance (this would have driven me nuts). Because it was so dark, it was hard to take pictures. She said she was glad she went just so she got to experience it, but it was definitely not something she would do again.

*Note: There are a TON of dogs and PUPPIES running around. I wish I had brought dog treats and a cup to give water to some of the puppies. Just be careful, they are super cute and I wanted to bring all of them home lol.

Built in 1142, Kerak Castle is an old crusader castle that had been historically used to protect assets in the Latin Kingdom of Jerusalem. It was used in the 2005 film, Kingdom of Heaven, but is most recently noted during a 2016 terrorist attack killing 14 people. Although the castle is not in great condition, there are great views from the balcony and an eery feeling walking through what’s left of it. I would have traded time here for more time at one of the other sites.

The Dead Sea is the lowest point on earth and is bordered by Jordan on the East Bank and Israel to the West. The salt content of the Dead Sea make you extremely buoyant in the water. It feels like you are just naturally floating on the surface. Some things to remember before entering the Dead Sea:

We were taken to a touristy area, but there was a lot of room for everyone to float around. There was a Dead Sea Mud station that cost around $3 USD to cover yourself with the mud. The mud is said to have many healing aspects including: Improves Psoriasis, Reduce Skin Impurities, Relieves Arthritis Inflammation, Soothes Chronic Back Pain, and Treats Acne. Some say the mud might ruin your light colored bathing suit. You can wash the mud off your body in the Dead Sea, just make sure you wash your face off at the showers and not in the sea.

This is the last known standing spot of the Prophet Moses before he passed away at the age of 120. It is said that Moses looked over the Promise Land before closing his eyes and taking his last breath. I was raised Catholic, but even though I am not practicing right now, I had sort of a calming sense being there.

This is a 19th center Greek Orthodox Church that houses the oldest map of Palestine and has given historical insight into the movements of the region. The church itself is very small and doesn’t require much time to visit. 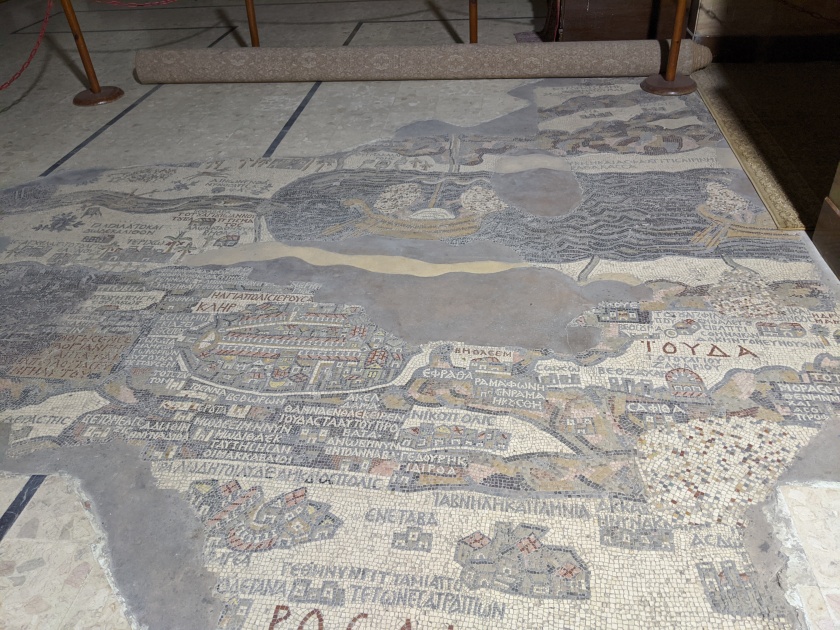 Amman is the capital of Jordan and home to around 4 million people. It houses numerous ancient ruins including the Roman Temple of Hercules, Historic Citadel (this was closed when I was there due to the band Coldplay having a multi-day concert there… however you can get a great view of the city from outside the front doors), and the Roman Theater. If you take an Uber to downtown near Grand Husseini Mosque, the oldest mosque in Amman, there is some souvenir shopping in that area. I also recommend going by Habibah Sweets and getting a pastry.

Jerash is a city north of Amman that was built around 7500 B.C. It’s known for its Greco-Roman ruins including Hadrian’s Arch, the Corinthian Columns of the Temple of Artemis, and the Forum’s oval colonnade. This is a large area and requires a whole day trip to see everything.

Recently, Nov 6, 2019, there was a one man attack where 8 people were stabbed. I realize this may seem scary and deter people from wanting to visit, but remember that this can happen anywhere in the world and is not secluded to the “Middle East.” I felt totally safe my entire trip and only wish I was there longer. I hope this post encourages you to put the stereotypes to the side and take that trip to Jordan! 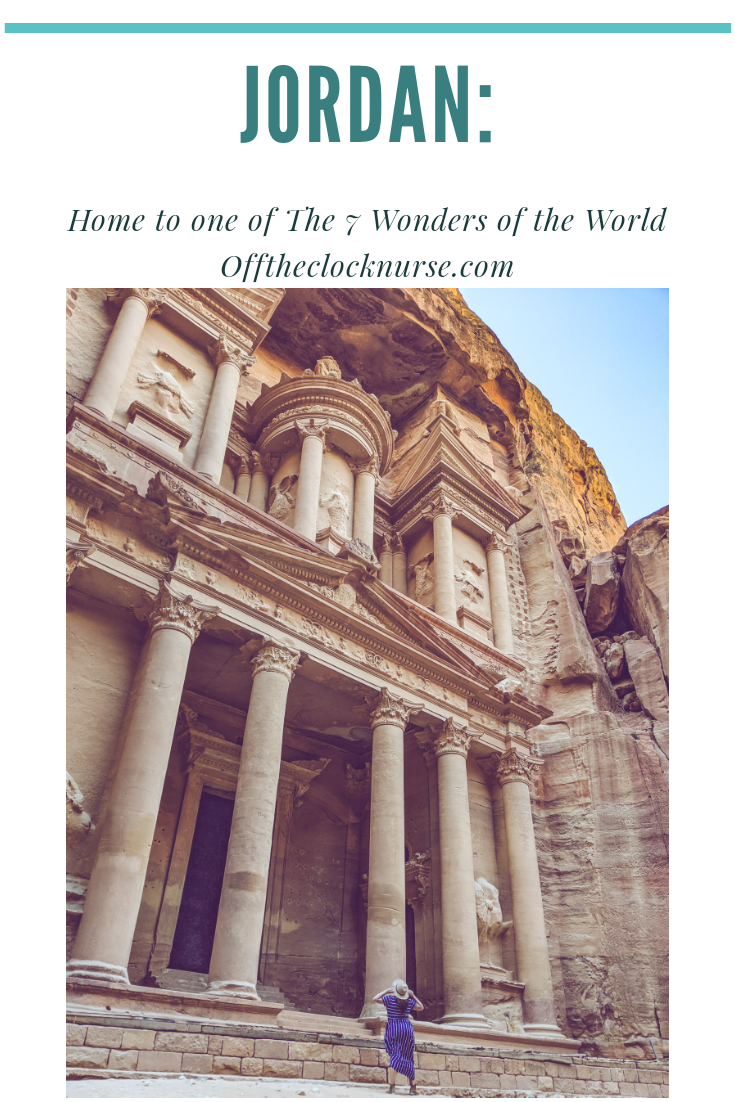